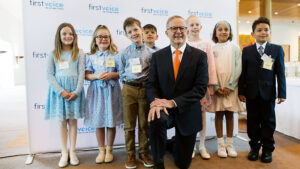 The ‘Power of Speech’ took place on 8 September 2022 at the Australian Parliament House in Canberra. As part of the event, seven children between the ages of 7-8 from First Voice member organisations around Australia and New Zealand, who have received cochlear implants, took  to the centre stage. The children presented short speeches to key policymakers around this year’s theme, ‘Connections’, proving that deafness is not a barrier to human connections and how early intervention support and cochlear implants have been helping them reach their full potential. These inspiring children also shared with politicians how they defy commonly held misconceptions about growing up with a hearing loss.

“We are delighted to announce the official date for the Power of Speech, an event that allows children who have hearing loss and who hear the world through their cochlear implant to share their stories and experiences with politicians. It gives attendees the chance to hear first-hand the integral role that the services provided by the members of First Voice play in the lives of those with hearing loss,” says Jim Hungerford, Chair of First Voice.

The event is made possible due to the sponsorship of Cochlear Limited. “Australia leads the world in addressing hearing loss in children due to a combination of universal newborn screening, strong referral pathways provided by Hearing Australia, government funding for services and devices, timely access to world leading technology and the First Voice early support
programs,” says Cochlear CEO and President, Dig Howitt. “It is a model seen as global best practice because it delivers outstanding outcomes for kids, their families, and our community as a whole.”

First Voice is the regional voice for member organisations that provide listening and spoken language
early intervention services for children who are deaf or hearing impaired. First Voice advocates for world-class early intervention services that give deaf children the listening and spoken language skills necessary to achieve mainstream education, employment of choice and social integration within the hearing world. Its members include some of the largest, oldest and most respected centres providing services for childhood hearing loss in the world. Click here to view our member and affiliated organisations:
https://www.firstvoice.org.au/first-voice-member-organisations/

Introducing the 2022 Power of Speech Participants

Evie and Lilla Harmsworth
Western Australia, Telethon Speech & Hearing
Evie and Lilla were diagnosed with bilateral moderate to severe sensorineural hearing loss; just two weeks before
they started kindergarten, the girls’ cochlear implants were switched on. They are bright, sociable and confident
and are determined not to miss a sound in their very active lives!

Jeremy Carr
South Australia, Can:Do 4Kids
Jeremy is bright and energetic! He enjoys skateboarding and BMX with his friends and plays as a midfielder in the
school soccer team. Jeremy loves playing with LEGO and baking zucchini muffins to take to school for snacks. After
bedtime, he secretly turns his light back on and reads his books until he falls asleep!

Audrey Hawkes
Queensland, Hear and Say
Audrey is eight years old and was born with severe sensorineural hearing loss caused by connexion 26 genetic
mutation. She has bilateral cochlear implants and has achieved language levels above her age expectations.
Audrey loves to read, talk and sing. She enjoys listening to podcasts and making funny videos.

Harper Rollinson
New South Wales, The Shepherd Centre
Harper is a lively, spirited seven-year-old who lives in Bulli, NSW. She was diagnosed with profound hearing loss at
18 months old, following intense chemotherapy treatment for a rare eye cancer, Retinoblastoma. Today Harper is
cancer-free and probably hears better than all of us, thanks to the wonderful technology of Cochlear.

Abigail Loganathan
Northern Territory, NextSense
Abigail is a talented and lively eight year old. She was diagnosed with profound bilateral sensorineural hearing loss
and received her implants at six months. She plays two instruments (violin and piano) and usually sings her
favourite songs from a TV show all the way home after being picked up from school.

Matthias Berndt
New Zealand, The Hearing House
Matthias is eight years old and lives in the City of Sails, Auckland. He was diagnosed with sensorineural hearing loss
in both ears as an infant, and received cochlear implants at age two. He loves music and the performing arts, as
well as taking part in sports and other extracurricular activities with hearing friends.