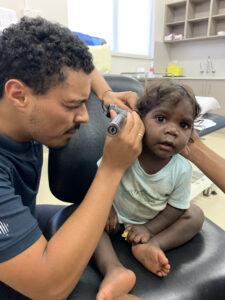 Through HAPEE 6,000 tests in over 200 communities have been conducted. In addition to providing diagnostic hearing assessments, HAPEE aims to improve the community’s capability to complete the initial identification of ear and hearing problems in young children. HAPEE is a result of a $30 million investment by the Australian Government to reduce the long-term effects of ear disease in Aboriginal and Torres Strait Islander children and aims to raise the awareness of the need for early identification of ear and hearing problems in toddlers and babies.

Key to the success of the HAPEE program are the efforts of Hearing Australia’s Community Engagement Officers, who are Aboriginal and Torres Strait Islander people who work closely with the communities and partner organisations to build strong relationships and ensure HAPEE services are delivered in ways that are culturally appropriate for each community. The information they collect is vital to the functioning of the HAPEE program. The challenge facing Hearing Australia has been collating, storing and sharing this information with audiologists and other employees.

HAPEE found that traditional methods of information collection using Word and Excel was very manual, which caused the doubling up of data collection and work processes, especially for Community Engagement Officers. For the audiologists, accessing the most relevant and current information was particularly difficult when travelling or working in remote areas with limited network coverage. Information sharing and access was a real challenge.

In 2020 Hearing Australia audiologist Jacqui Peck realised there was a better way to collect and share information; a way that was accessible and intuitive for all staff to use and that would facilitate best practice data collection and reporting. Plus, she was able to build it herself with the support of Hearing Australia’s IT team.

Mike Brett is the Chief Information Officer at Hearing Australia and is currently leading the modernisation of the organisation’s core systems.

Hearing Australia operates in over 170 locations across Australia. It is the nation’s largest provider of government-funded hearing services. The organisation sought to modernise its infrastructure, move away from on premises legacy solutions and embrace cloud computing.

It has taken a ‘Microsoft Connected’ clouds approach to modernisation working with Microsoft Consulting to rapidly leverage Azure, Microsoft 365 and Dynamics 365 to update financial operations and practice management.

According to Brett; “It was very fortuitous that we managed to land that just before the pandemic hit last year and it’s really kept us afloat. And as Jacqui will attest, it’s given us an opportunity for new ways of working.”

During her outreach stint in the Northern Territory, Peck happened across a YouTube video showing how someone had used Power Apps to build themselves an application to collect information remotely. It seemed to fit the bill for what HAPEE needed and luckily Hearing Australia had access to Power Apps through its existing Microsoft licence.

What was important to the success of the app was that Peck had a clear and detailed understanding of the issues HAPEE was designed to tackle. “Early middle ear problems are quite devastating for people, especially if they don’t get treated. They can lead to lifelong issues, such as poor access to employment and higher risk of being held in custody – if you cannot hear properly you cannot advocate for yourself, especially if you haven’t been hearing well for your whole life,” she says.

That is why Hearing Australia believes it is essential to identify hearing loss early on, especially between the ages of 0-3 when a child’s listening and language skills are developing rapidly. That means that when that when a child starts school, their listening and communication skills are more likely to be on track, so they’ll be better equipped to participate in, succeed in and enjoy education.

The HAPEE program places huge focus on building relationships and working with communities to build their own capabilities to self-manage ear health and do hearing tests. This is designed to be sustainable and reduce the reliance of communities on external services that may only visit every few months.

HAPEE also works closely with the community members themselves to bring awareness to the importance of good hearing and good ear health through HAPEE’s Indigenous Community Engagement Officers. Because this is a new way of working, a lot of the information the Community Engagement Officers collect is completely novel to Hearing Australia and so HAPEE’s information wasn’t easily captured in the existing system.

After spending some time educating herself about how Microsoft Power Apps worked, Peck created her first Canvas App using Excel as a basic data source, with no programming or coding required.

Using Microsoft Teams, she reached out to one of the organisation’s developers who provided guidance and access to Microsoft Dataverse (previously known as the common data service) which steers access to data in Hearing Australia’s other Microsoft systems.

Once Peck had access to Dataverse, she was able to build her first model-driven app which she described as a game changer. The model-driven app for the Community Engagement Officers and operations team allows the bulk of data entry from a desktop computer. Relevant information would then be pulled out and repacked using a Canvas App designed and built specifically for audiologists to use on mobile phones while out working on the road and in remote communities.

The Canvas App also allows audiologists to access training material that is not stored in the Dataverse so it becomes a one-stop-shop for the clinical team. The audiologists’ Canvas App along with the Community Engagement Officers’ model-driven app share the same single source of data, so, any information created or updated in either app will automatically show up in the other.

Peck says; “I was working full time as an outreach audiologist and would be out in a community needing to know who the contact person was or where I should park my car I also needed to know any cultural customs that I needed to follow and if I didn’t get to ask the Community Engagement Officers before I left, I often couldn’t call them as they would be in meetings or out of range in community themselves. I would come home on the weekend and add anything I thought I needed into the app. I spent a lot of time talking to the Community Engagement Officers and operations team members and added bits that they needed into the app too. The end product was two apps built by HAPEE team members for HAPEE team members.”

She is now keen to build additional apps, including one to promote workplace health and safety that will allow audiologists to note the status of roads and the safety requirements for each trip, which can be to very isolated areas.

Peck also hopes that self-service portals can be developed, allowing communities to check when the next HAPEE visit is scheduled, to request additional support services such as telehealth in between face-to-face visits, and to access high quality reliable information that is appropriate to Aboriginal and Torres Strait Islander people.

Peck notes that having access to Dynamics 365 at the back end, together with the support of an agile and flexible IT team which is keen to support new ways of working, has been critical to the success of the HAPEE app.

She says Mike Brett has been sharing the need for new ways of thinking and new ways of working to the entire organisation.

Brett adds; “Citizen development is a new way of working. It actually empowers our people to solve the problems, rather than second guessing and documenting their requirements in the old traditional way. Even if it’s just prototyping – that can really help us going forward. We can take those prototypes, work with that and embed it into our core systems, to make our business a lot easier for our people and ultimately for our customers. So, it is a new way of working for us, and it’s something we’d really like to encourage.”

Peck says this approach also encourages people across the organisation to think more deeply about data – why it’s being collected and how it’s being used. It’s helping Hearing Australia to establish a single, valuable source of truth for the organisation with Power Apps making that accessible to people when and where it is needed.

Disclaimer* The Hearing Assessment Program is an initiative of the Commonwealth Department of Health. Aboriginal and Torres Strait Islander children not yet attending full time school are eligible to be seen. All services provided under this program are free of charge. A hearing check includes a number of age appropriate tests of hearing and middle ear function.